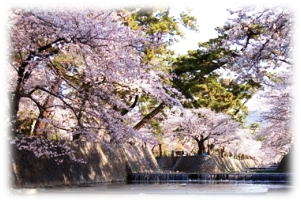 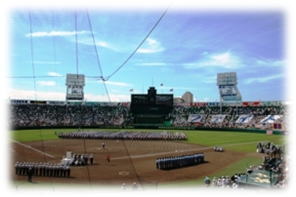 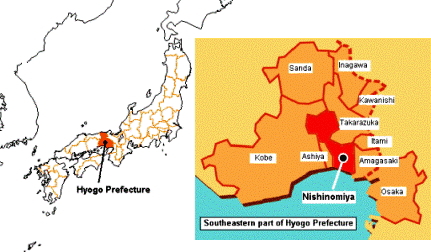 Nishinomiya, the city for “Living, Culture and Education” with a population of approximately 490,000 and an area of 100.18 sq km, lies nestled between Osaka and Kobe in the southeastern section of Hyogo Prefecture. In addition to its cultural and educational facilities, Nishinomiya is surrounded by the natural splendor of the Rokko Mountain range to the north and beautiful Osaka Bay to the south.
Nishinomiya's rich heritage is revealed in the historical landmarks dotting the region and in the mention of the area in historical records dating back more than 1,000 years. The city is also famous for Koshien Baseball Stadium, the Mecca of high school baseball. Food processing accounts for 80% of Nishinomiya’s industries with sake production at its core. Food processing figures rank top-class nationwide. Also, due to convenient transportation via the Hanshin Expressway to the south and the Chugoku Expressway to the north, Nishinomiya meets industry transport requirements, thereby inciting growth in both transport and communication businesses.
Though the Great Hanshin-Awaji Earthquake of January 1995 brought devastating damage to the city, recovery work has been undertaken and advancement has been made in creating a safer city.
In April 2008, the city became a core city and aims to achieve further growth as an urban core of the Hanshin region.

Nishinomiya City is located in the southeastern part of Hyogo Prefecture. To its south is Osaka Bay; Amagasaki and Takarazuka are to the east; Ashiya City to the west, and to the north Nishinomiya meets Kobe City and the Rokko Mountain range.

Southeastern part of Hyogo Prefecture:
In the Seto Inland Climate Zone, the weather is moderate with a small precipitation throughout the year, while a characteristic phenomenon of the urban climate is observed. The air is dry with small precipitation and low humidity and the city’s proximity to the sea helps to moderate the temperature a bit. Days in winter, in particular, is sunny and dry. In a rainy season in early summer, torrential rainfall occurs due to the presence of the Rokko mountain range and warm moisture-laden air moving up the Osaka bay. 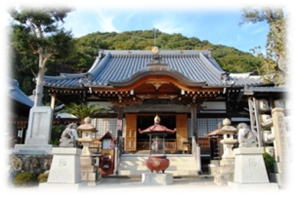 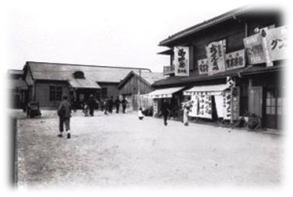 From rice-farming villages and excavated remains of villages in the city, it is known that people had already lived in Nishinomiya in the Yayoi era (from about 500 B.C. to about 300 A.D.) and carried out farming and fishing.

Kofun or graves of powerful clans built in the Kofun era (from about the middle of the 3rd century to the 7th century) can be found in the city. In the “Nihon Shoki” (The Chronicles of Japan) and “Manyoshu” (A Collection of Ten Thousand Leaves) edited in the Nara era (710~784) the names of Hirota Shrine and Muko-no-tsu appear. Muko-no-tsu, located around present day Tsuto, was a major port of the Yamato state. Kochi-jinja shrine, Kanno-ji and Jurin-ji temples were built in the Heian era (794~1185), and a shrine town developed around Ebisu-sha (Ebisu shrine) which originated as a branch shrine of Hirota Shrine.

When new Buddhism spread in the Kamakura era (1185~1333), many temples were built in Nishinomiya. They included Jokyo-ji temple of the Jodoshu sect, Gyoko-ji temple of the Jodoshinshu sect, and in the period from the end of the Kamakura age through the Muromachi era (1336~1573) Rokutan-ji, Kaisei-ji and Mosho-ji temples of Zen sects. Around Nishinomiya-jinja shrine a town was created, and through kugutsushi (puppetry) which was the forerunner of ningyo joruri (puppet theatre), devotion to the god Ebisu spread throughout Japan.

During the Edo era (1603~1867) Nishinomiya and Namaze prospered as lodging towns. The sake industry which had begun in the Muromachi era developed further, and the tasty Nishinomiya sake which was prized in Edo (former Tokyo) was shipped in barrel-carrying ships to Edo from Nishinomiya and Imazu ports. At the end of the Edo era ‘miya-mizu’ water was discovered and sake brewing developed even further. Farming and fishing also prospered. In the 18th century, the city had grown to have a population approaching 10,000 and came under direct control of the Bakufu (the Shougunate government). In the northern area of Najo and Yamaguchi, papermaking and bamboo craftwork flourished.

With the advancement of modernization in the Meji era (1868~1912), railway lines opened in Nishinomiya, and in Meiji 7 (1874) Nishinomiya Station was opened. At the end of the Meji era, the Hanshin Railway line opened, and at the end of the Taisho era (1912~1926) the Hankyu Railway line opened. Leisure facilities, including the Koshien Baseball Stadium, as well as housing were constructed, resulting in the Hanshin region (the area between and including Osaka and Kobe) developing into a residential zone.
On April 1, 1925, Nishinomiya was officially designated as a municipality and Nishinomiya City was born. At that time, the total area of the city was 5 km with a population of 34,000 people. Overcoming recovery from World War II and the Great Hanshin-Awaji Earthquake, etc., Nishinomiya has today grown to be a large city with a population of 480,000. 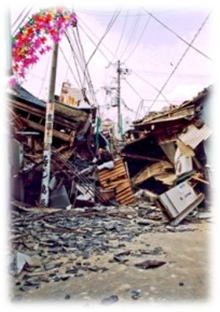 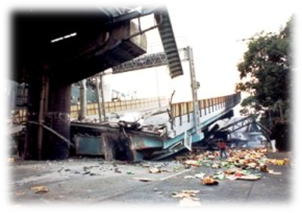 The Great Hanshin-Awaji Earthquake struck Nishinomiya at 5:46 a.m. on January 17, 1995. It devastated our city all at once, claiming many precious lives and damaging property. From that day onward, enormous efforts were made for emergency relief, recovery and reconstruction.As we move forward, we need to be reminded of what the disaster has brought to us. We are responsible to provide our findings to other organizations and to the younger generation.

Detail of the Earthquake 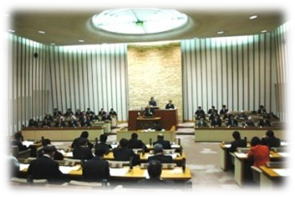 The Nishinomiya City Assembly consists of forty-five assembly members elected by the citizens. They meet regularly four times a year in June, September, December and March. In order to reflect the citizens’ opinions in civic affairs, legislators debate and determine such issues as budgets and ordinances and aim to achieve a better municipal administration and improve the welfare of the citizens. Extraordinary sessions are held on an as-needed basis.
A steering committee is set up to operate each session more efficiently. Four standing committees examine proposed bills in detail from expert viewpoints. There are General Affairs Committee, Citizens’ Affairs, Culture and Education Committee, Welfare Committee, and Construction Committee. When necessary, special committees are established to research specific issues. 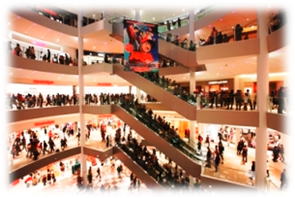 Nishinomiya City’s small businesses were centered around the main stations of the Hanshin, Hankyu and JR railway lines, however, in recent years many large-scale retail businesses have opened stores along major roads.One core of the city is the area around Hankyu Nishinomiya Kitaguchi Station. In 2001, the ACTA Nishinomiya complex which includes large retail stores, specialty stores and public facilities was completed as a post-earthquake recovery project, in 2005, the Hyogo Performing Arts Center was opened to ease the emotional suffering of the earthquake and to revive the arts, and in 2008, Hankyu Nishinomiya Gardens, the largest shopping complex in west Japan, was opened. The completion of these projects has increased vitality and excitement in the city year by year. Also, in 2003, in the Hanshin Nishinomiya area which is the western core of the city, EBISTA Nishinomiya and the redeveloped AVIS PLAZA were completed. In 2009, in the Koshien area, KidZania, a facility where children can experience doing many kinds of work was opened. The increase of these large-scale commercial facilities is hoped to attract consumers not only from within the city but also from outside.
On the other hand, present shopping markets and small retail stores are needed to play the essential role of keeping vitality in local communities. 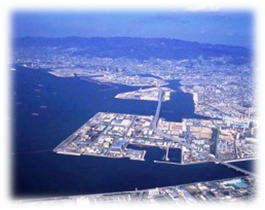 As of 2007, Nishinomiya’s industry was ranked 8th in the prefecture when calculated on shipment value. Beverages and processed food accounted for 70%. Beverage and food industries centered around the local sake industry are located from the seafront area to the inland regions of the city. There are many small and middle-size companies operating in the reclaimed land areas of Naruo-hama and Nishinomiya-hama. Companies mainly in the logistics business operate in the northern area of the city,
Over the long term there appears to be a declining trend in the value of shipped manufactured products, the number of businesses, and number of employees in Nishinomiya’s industries. 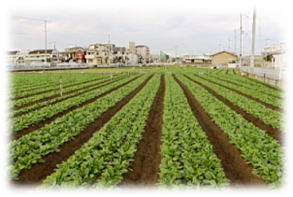 Approximately 70% of Nishinomiya’s farmland is located within the urban district and is typical city farming. In the northern area, agriculture focuses on rice farming, while in the southern area which is near Osaka and Kobe which are large consumer cities, vegetable farming is carried out in all seasons.
With the growth of urbanization and the reduction of farmland, the city’s agriculture faces a critical situation. The protection of farmland and securing successors for farming are also serious problems. 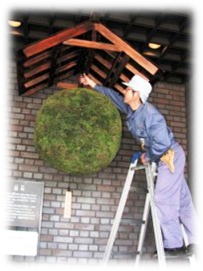 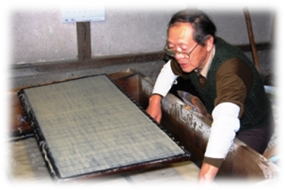 There was literary reference in the 17th century to the Najio district in the northern part of the city as being the home of ‘washi’ (Japanese paper). At present, there are few people left to pass on the washi-making tradition. However, a washi learning hall has been built next to a local primary school where children and others can learn how to make washi and pass on the washi-making tradition. 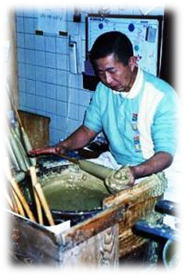 Japanese candles were manufactured in the Edo era as the Himeji clan industry. At present, the only business in Hyogo Prefecture producing them is Matsumoto Shoten which in Meiji 10 (1877) became an independent branch of a Himeji manufacturer. The business moved to Nishinomiya after World War II and mainly produces candles for use in temples. However, in recent years the company’s candles have become widely popular for interior decoration and use. 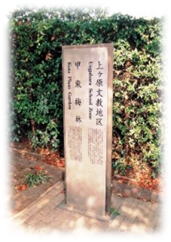 In 1963, Nishinomiya City made the “Cultural, Educational and Residential Declaration” with the goal of maintaining its beautiful scenery, protecting and cleaning its environment, promoting education, carrying out urban development suited to the city and to promote the social welfare of its citizens. The 10 universities/colleges in the city play a major role in bringing out the distinctive features of the city as an ‘cultural, educational and residential city’. With these colleges as a collective important cultural asset, and through cooperation between the city and colleges as well as inter-college exchange and exchanges between colleges and the city’s citizens, Nishinomiya promotes the creation a culturally attractive city through its ‘College Town Nishinomiya’ projects.
Also, blessed with its beautiful natural surroundings of mountains, rivers and sea, the city wants to develop beyond the ‘Cultural, Educational and Residential City’ course it has taken to create a culturally rich Nishinomiya with the ‘Nishinomiya – The City that Encounters♪Music’ as one concept for promotion in city planning. 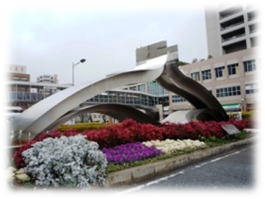 In 1983, Nishinomiya was one of the first cities in Hyogo Prefecture to present a Declaration as a Peaceful and Nuclear-free City. The city declared its support for the total eradication of nuclear arms and perpetual world peace. Through various activities, including exhibitions regarding the destructive nature of nuclear weapons, bus tours to Hiroshima every August, and awareness projects for local residents, the city continues in its efforts toward realizing a peace-loving society.
In 1996, to commemorate the 50th anniversary of end of World War II, the monument “Heiwa no Kokyo” (Peaceful Exchanges) was erected in the square south of JR Nishinomiya Station. The peace monument was erected to symbolize the goal of creating a society where people can live in peace, to pray for peace and teach future generations of it preciousness, as well as wishing for the city’s recovery from the Great Hanshin-Awaji Earthquake disaster. 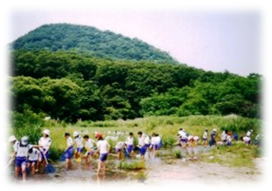 In 2003, the city pioneered the concept of having all who live, study and work in Nishinomiya participate and cooperate in environmental learning to promote sustainable urban and community development in line with the “Environmental Learning City Declaration”. The city continues its goal of creating urban and community sustainability for the 21st century centered on the participation and cooperation of citizens, businesses and local government authorities.
In 1992, Nishinomiya with its unique environmental learning system started the EWC (2011- Earth Watching Club – Nishinomiya) as a program for children to independently, continuously and comprehensively learn about the environment. In 1998, the “ECO Card / ECO Stamp System” was introduced for all children attending elementary schools in the city. This later developed into a system where anybody at anytime could participate in environmental learning. 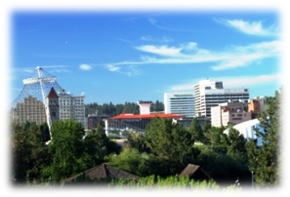 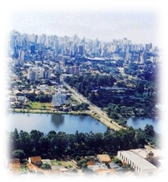 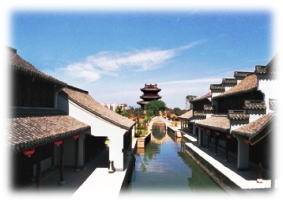